Nokia on Wednesday showcased two new Lumia smartphones powered by Windows Phone 8, called the Nokia Lumia 920 and Lumia 820, at a conference in New York, which was broadcast live across the world, including India.

The Nokia Lumia 920 is the company's new flagship smartphone. It has a 4.5-inch LCD touchscreen with all-new PureMotion HD+ technology and Qualcomm S4 1.5GHz dual-core processor, the first Lumia smartphone with dual-core technology. However, when quizzed about the reason for using LCD screen in the phone instead of AMOLED, the company officials cited incompatibility.

It features a 8.7 megapixel (MP) rear camera with PureView technology that can capture and record HD videos at 1080p. According to Joe Harlow, the head of Nokia's Lumia division, the phone has the best camera among all high-end smartphones.

Featuring wireless charging functionality and NFC, the new Nokia Lumia 920 features Nokia City Lens. This device is available in 32GB model and boasts of 1GB RAM and 2,000mAh battery. The new phone will be available in yellow, grey and red colours. The touchscreen not just works with fingers, but also with fabric. Nokia Lumia 920 has also teamed up with Rovio to provide exclusive Angry Birds content to users.

Offline maps with turn-by-turn navigation is another added feature of Nokia Maps. Another addition is Nokia Transport, which will tell the distance involved in the users' daily commute. CinemaGraph is new camera feature of Lumia 920 that adds animated features in a still image; this feature will now be available in the previous Lumia devices as well.

Its younger sibling, Lumia 820, comes with a 4.3-inch touchscreen and is powered by a 1.5GHz dual-core processor coupled with 1GB RAM. The other features include an 8 megapixel (MP) camera, 1650mAh battery, wireless charging and all exclusive apps that Lumia 920 has. The 8GB model comes with changeable back covers. 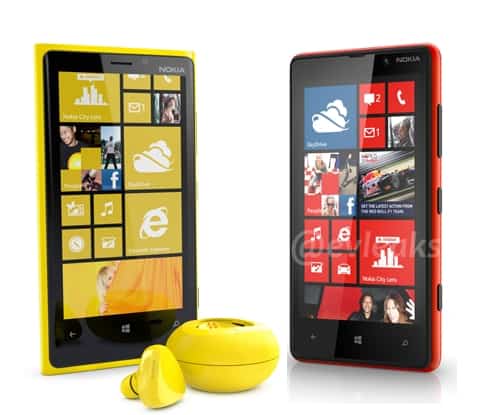 Nokia also said that the new phones will be available by the year end in select markets. However, the company did not reveal the pricing of both the devices.

Nokia's new Lumia phones are considered to be its last shot at success by analysts, who believe that if the new devices fail, the company will find it tough to get back in the smartphone market. The Finnish manufacturer has lost ground to Apple iPhone and Samsung Galaxy phones.

A few weeks ago, Nokia sounded a challenge to Samsung, hinting that the new Lumia series would emerge as a serious competitor. However, last week at the IFA 2012 in Berlin, Samsung stole its thunder as it showcased the first ever Windows Phone 8- powered smartphone, Ativ S. The South Korean company is the biggest smartphone manufacturer in the world at present, whereas Nokia sells its Lumia range in only 54 markets.

Nokia Location will become part of the Windows Phone platform, thus integrating itself in Microsoft's mobile OS strategy further, as part of its strategy to become the company's biggest partner in the mobile world.