"I will spend my last dying breath if I willing to go thermonuclear war if need to, and I will spend every penny of Apple's $40 billion in the bank, to right this wrong. I'm going to destroy Android, because it's a stolen product". 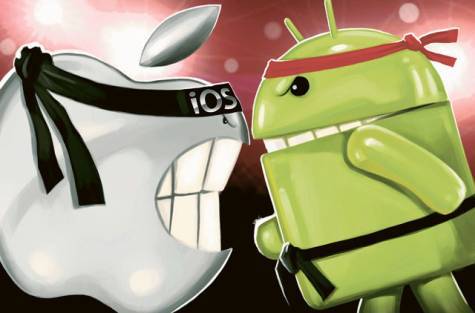 The above statement is a quote from Steve job's autobiography but why he wants to destroy andriod/google......What happened in few years!!! It seems like yesterday when both these companies were together hand in hand with each other to compete against world biggest software company MICROSOFT...Then what happened today why both these companies are making there blades sharper against each other

A few years back steve job's said that you cannot remove the name of google from the world of internet thn what such happended that after  little time it was steve jobs that declared that he will bankrupt google in the process even after the pass of great steve jobs  apple is following the path shown by him and in the process Apple Inc. said Google Inc.’s YouTube won’t be included in the next version of the software used in the iPhone and iPad that is ios6, the latest evidence of escalating competition between the two companies. According to an official statement, Apple said,Our licensing to include the YouTube app in iOS has ended. Customers can use YouTube in the Safari.

The war started when google decided to jump into the market of smartphones by providing os ANDRIOD to the apple rivals like htc,samsung.
Andriod not only challenged apple but also removed it frm the position of king

Google was a major partner in crime wth apple when iphone was launched google maps,google engine, youtube and many apps were came default but then google stepbacked and launched andriod a free os and now apple and google are fighting against each other and this was made official when Google CEO Eric Schmidt Resigns From Apple's Board Of Directors and steve jobs commented to former CEO OF GOOGLE "I DONT WANT YOUR MONEY"  in context of it it says like that "I DONT WANT YOUR 5 BILLION I HAVE A LOT OF MONEY BUT I WANT IS TO BRING YOU DOWN".

Apple even removed the GOOGLE search engine and deal with microsoft bing to replace bing in its operating system and after buying motorola google replied by filing patent cases against apple and from that time apple is suing many smartphones companies that are using andriod and earlier this year it removed google maps and introducing apple maps  in ios 5 and now youtube..whatever may be the reason the profit is of coustmer as both are trying to attract coustmer with many services and offer and now there seems like birth of new challenger in form of windows phone trying to dethrone making battle more intersting as there can be only one king in jungle ....